I can’t believe we’re on the downward slope to Christmas already. During Q2 I completed five projects, which just happened to be the five that I added to my list at the start of the second quarter. Rather disappointingly, that does mean that from my original list of 21 outstanding projects I have still only completed seven this year. However, I’m not adding anything new this quarter and I have made some significant progress on several of them so there will be definite finishes in my Q3 future!

I’ll be using the hashtag #2019FALQ3afoxmadethis on Instagram to link all my finishes from this post together.

These two versions of the Summer Sampler quilt-along were both missing the last 5 blocks. The Amy Butler one is now a complete top, basted and ready for quilting!

I have decided to not complete the final blocks for the summer palette version, but I will make them up into a charity quilt and donate it instead.

This is sooooo close to being a finish, I’m actually waiting for it be delivered back from the longarmer today as I update my list. It didn’t quite make it back before the link-up for Q2 finishes but it will definately be my first finish of Q3 – watch this space!

Of all my quilt UFOs this is probably the furthest from being finished. Started at a Sarah Fielke workshop in Huddersfield, on one of the hottest days of 2016, I still love the idea of this quilt and would like to pick it up again. Maybe it will become a wall-hanging rather than a full quilt?

My current evening EPP project, but like most hand sewing, it’s slow sewing. I’m confident this will be a finish in the first half of the year though as most of the pieces are already cut, basted and bagged so it really is just a case of finding the stitching time.

Ah, old friend. My first foray into both EPP and fussy cutting, the catalyst for my love of Tula Pink fabric. This project means a lot to me but it has been relegated in favour of Pollinate and other projects. I probably won’t return to it in Q1 if I’m honest with myself, but it deserves to get some love later this year.

Trying to have three large EPP projects on the go, two of which require extensive fussy cutting was a bit of a poor decision on my part. This one may well rollover to FAL 2020 but never say never, right?

Jenny Haynes, perhaps better known as Pappersaxsten, came to our Leeds Modern Quilt Guild to run a curves workshop. I started making her new Footloose pattern but have only completed 2/4 blocks. The picture below on the right is a mock-up of what it should look like when finished.

This was a pattern test that I did for Sheri at Whole Circle Studio. It just needs basting, quilting and binding to finish it off.

This was the product of another Sarah Fielke workshop (on another very hot day in Huddersfield). Originally I intended to make a set of four into a mini, but I think I’ve used the set aside fabrics in another project. I might border it and make a cushion or use it as a pouch front.

It doesn’t look all that much in this picture but I’ve high hopes for this cabbage! Started at a workshop with Nick Ball a.k.a Quilts from the Attic, the king of improv veg quilting, this needs finishing off with a background and then it can be basted, quilted and bound.

Another workshop product from last years Simply Solids Retreat. This EPP Kalidescope pattern match was made using the pattern and instructions by Amy at Coffee Rings Studio. I want to make two more from other Tula prints and frame them as a triptych for my sewing room wall.

I drafted this design for three panels made up of HSTs to hang in my newly decorated bedroom. Two years on and the wall is still blank, I do have a small pile of HSTs though and fabric set aside to make more.

Last, but not least, my final UFO from the Simply Solids Retreat. The start of an EPP block designed by Jenny Jackson of Hashtagsew. The fabric is all still set aside for this and I plan to make up a four or six block mini.

Here’s hoping for some good finishes in Q3. I realise now that I’m certainly not going to be finishing all of my big outstanding EPP projects this year but then I guess I’m going to need some projects leftover so I can join the FAL next year too!

Good luck with your FAL lists this quarter, here’s a to a summer of productive sewing for us all. 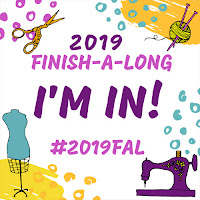